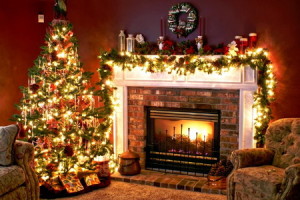 There are many people who are taking up their verbal swords against anyone deigning to celebrate Christmas. For a few years, I abstained and refrained because of the pagan origins of Christmas. Many years ago, The Lord Had me research those pagan origins, and the symbolism of the tree, wreath, ornaments and more. Horrific, they were just horrific. Since that time, He’s Given new insight on participating in Christmas festivities.

Yeshua/Jesus Came to earth to Bring clarity, to Teach, to end the Law of the Old Testament and much more. Is HE not The Lord of the Sabbath? Many times over the years there were Friday nights I was in a place where I was not able to light the candles, which had become something I looked forward to each week. Aaaaahhhhh……Challah! And all that the Sabbath entailed. Yet, in His Graciousness, The Lord Said it was fine with Him that I had not lit candles, which have become a ritual to many. It was more important what was in my heart, and that in my heart I had already honored Him with that strong desire to fall in sync with His Feast Days and Sabbaths, but most of all to honor Him. It’s not the rituals, its what is in our hearts. It is not a Federal crime to miss a Sabbath, or, to miss church on a Sunday!  The question is more, how often is He in your hearts and on your minds? Do you go through life as if you are before His Throne in every moment?  You are!  He Is the Basis of your life and being.

The stories come to mind of The Lord’s Words when the disciples picked corn, when He Healed a man, of the one lost sheep of the 99, and more on the Sabbath. Those very examples say to “be prudent and practical.” It is greater to honor Him in those ways, reaching out for the lost, feeding those who don’t have food, etc., than doing rituals for the sake of ritual – mechanically.

To put up a Christmas tree, or a manger scene does not make those things idolatrous. What makes ANYTHING idolatrous is the worship of a person, pet, place or thing. It is the consuming love in your heart, and your heart’s desire. The act of putting up a tree as a “tradition” in itself is not idolatrous. It indeed, is simply a custom whose original meanings aren’t even known to most people who put a tree up. The ancient meanings were lost long ago, and Christmas has become one of the two times of the year that The Lord is honored, thought of, and people practice His Ways more than at any other time.

The time is coming when The Lord Returns, that the sheep will be divided from the goats. In my studies, I have found that there is a belief among some, that The Lord Will simply Look at our hearts and weigh them. To not put up a tree is fine. To put one up is fine. But to judge those who do or don’t is not fine. That’s judging and placing yourself higher than the King of All Kings.

Yes, eschew evil. However, in ancient days when trees and wreaths and the ball shaped ornaments hung on them had sinister and sexual meanings, it was very different. By putting a tree up today, I would say that there probably aren’t too many people across this world that look at the accoutrements of Christmas and while handling them or after, attach those ancient meanings. Folks, it’s what’s in your hearts and minds that matters most to The Lord.

He once Showed me, that to say the “Lord’s Prayer” or other prayers while our minds and hearts are focused on everything else is sin. That is when we SHOULD focus on the words. But when people are celebrating Christmas these days, their focus includes giving, helping, reaching out to those less fortunate, and special times spent with family and friends. How many “secret santa” stories have you read this year of layaway gifts being paid for? That’s kindness. God Must Have Touched their hearts. Christmas, is often recognized as the time we celebrate John 3:16, the Giving of our Savior, even though we know today it’s not His Birthday.

“Love one another, as I Have Loved you,” is The Lord’s Commandment. Stop judging what others are doing or not doing, celebrate Him by ACTING like Him. Which one of us can cast the first stone? We are all sinners saved by grace. Before you draw the line in the sand for others, draw it for yourself.

Celebrate Christmas if you will, and try to keep Him the center of it. In all the years of being a single mother with no child support, we always had a tree and gifts, except one. My children were older when it happened, and despite the many years I was able to shower them with gifts, I wasn’t able to that year due to circumstances beyond my control. I took a floor palm and put a small table under it, on which I put a manger scene with little white lights on it. We had our Christmas Eve festivities, including singing and the reading of “One Solitary Life” and more. The next morning when I awoke, I found a great and unspeakable gift had been given to me. It was the first time I experienced being enveloped in the “Peace that Passeth all understanding.” I was lifted emotionally and spiritually in a Heavenly Bless, free from all cares and worries. It continued all throughout Christmas Day. Don’t think The Lord Didn’t See or Know my heart. He Wasn’t Concerned that I “celebrated Christmas that evil pagan holiday.” I honored The Lord with the manger scene, and He Blessed me for it. I was thankful for the many years we were able to celebrate and hoped the children were thankful, too.

Let’s stop the finger-pointing and examine our hearts, and learn to love each other whatever our choices may or may not be. His Answers are the only Right Ones. Our human minds cannot comprehend the Great Depths of Love and Mercies, Grace and Compassion that He Is. He Overlooks our faults and Sees our needs. Christmas is one of the few times a year that families make a point to gather together. I’d want Him in the midst of it, wouldn’t you?

Now, having said all of the above, it follows that I questioned the “Worldwide Waves Of Praise” on Christmas Days, quite a bit, until The Lord Showed me that the whole world should be praising Him – every day. And that by re-inserting Him in Christmas through gathering family and friends to praise and worship Him, it is right and appropriate in His Eyes. Every day is HIS. We’re “taking back the night” from satan, commercialism and santa claus, causing people to remember The Greatest Gift ever Given.  It’s teaching your generations what is appropriate, in remembering Him.

Join us, please when the clock strikes 3pm in your time zone. Whether you are Christian, Messianic or Jewish He Deserves to Be Praised every day. I know from the last seven years of Waves Of Praise, that all of Heaven looks forward to hearing voices raised in praise 360 degrees around the globe. Who will show up this year? God Knows. I hope you and your family will make this a new and annual tradition. 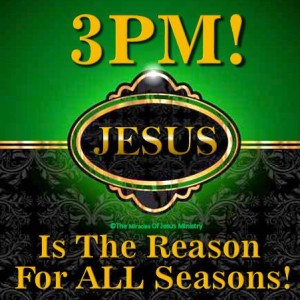 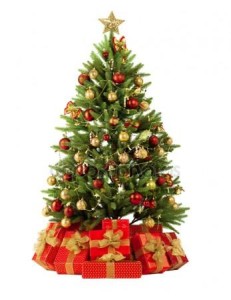