Is santa in the Bible? The answer is……YES! 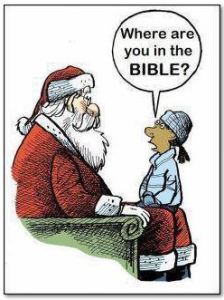 The answer will be given.
Check out this chart first, please!
See if you can guess the answer.

John 8:44  Ye are of your father the devil, and the lusts of your father ye will do. He was a murderer from the beginning, and abode not in the truth, because there is no truth in him. When he speaketh a lie, he speaketh of his own: for he is a liar, and the father of it.

One last question.  What does satan deceive you with?

Answer:  The kingdoms of this world.  That’s what Christmas is often about.

Matthew 4:7-9 Jesus said unto him, It is written again, Thou shalt not tempt the Lord thy God. 8 Again, the devil taketh him up into an exceeding high mountain, and sheweth him all the kingdoms of the world, and the glory of them;9 And saith unto him, All these things will I give thee, if thou wilt fall down and worship me.

Clarity About This Praise Movement

Greetings!  There are many people writing to discuss various aspects of this movement.  The Lord Holy Spirit Has Been Bringing Clarity through prayer and seeking Him.  This movement is a forerunner of the whole earth praising Him. He Wants the nations to cry out for Him!  To put Him before worldliness and the flesh.  It is a forerunner of “Jew and Gentile – one in Messiah.  HE Chose Christmas Day, not because it is the time of celebrating His Birth, but because people think of Him at that time, and, because “santa claus” has “gotten all the credit.”  We are infusing HIM, and raising HIS NAME on a day of pagan celebration.  More on this in the article below (For Jews, Messianic and Christians.)  I invite your comments and discussion, as iron sharpens iron.  Please see these links:
Biblical Basis (Scriptures) – The nations shall praise The Lord!
For Jews, Messianic and Christians – All peoples should praise The Lord, He Would Not that any should perish!

How To Participate – Discusses not making this praise fest about pride or performance, but rather a sweet and personal offering from the heart
I strongly believe in developing a deep and abiding “relationship” vs. going through motions in a public setting.  My life is laid down before Him for many years.  I’ve been through deep and prolonged sufferings, through which I’ve come to rely upon Him AS my “Everything” and FOR everything that is needed.  Worship of The Lord is a deeply personal thing but gathering together has added benefits.  Where two or more are gathered, He Is in the Midst of them.  He Inhabits our praises. There is a multiplied effect of people gathering to pray and praise Him.  I pray that His Presence Will Overshadow each gathering, and that miracles will happen!  I pray that backsliders will be touched through and through by Holy Spirit!  I pray that people who don’t know Him will be touched to accept Him as their Savior and King.
We are swiftly coming to the time, and already seeing this, when hearts will be crying out for Him during times of tribulation on this earth.  Starting and conducting this praise movement for 5 years now, has been a work of obedience.  Even now, I sit in a motel room not knowing if I am staying or leaving.  He Has Provided for me this way for over 6 years, yet I was a former Controller and Management Consultant.  I know that even if He Asked me to return to sleeping in my car in this winter weather, I would go to a library or other place where I can continue contacting His children across the earth to ask them to join in. This my daily walk with Him.  I only want what He Wants.  It is a great sacrifice to not be with my 4 grown children, their spouses, and my 12 grandchildren, yet this is what The Lord Has Required of me.  He Does not do these things lightly, but for His Purposes. He Has Asked that funds not be raised for this effort, as it is “the right thing to do.”
We must put aside the legalism and ritualism of what this is “supposed” to look like and just praise Him from the depths of our inner being.  Let us follow His Spirit and not the letter of man-made laws of what worship should look like.  This is not about performance, not about being “seen.”  Many can gather together and still be in their own personal closet with Him.  And if they are about “look at me” while singing, then Holy Spirit WILL Correct, Train and Advise.  That’s not our problem, it’s His Job.  Our job is threefold:  1) monitoring our own hearts, 2) praising Him with every fiber of our being, and 3) spreading the word about this.  However you choose to participate, is between you and The Lord!  This is just a start, and people will grow and the movement will grow over the years.  Let’s put our human minds aside and come from our hearts!
Therefore, I ask you to prayerfully consider taking His Desires, and His Requests that I’m passing through these emails to as many people as each of you can reach.  Onward!  Toward His Second Coming!  And towards the whole earth crying out for Him!
In Christ,
patty

Christmas Is A Pagan Holiday – Should We Be Celebrating It?

This is a deep topic.  I will provide more information over the coming year in preparation for Christmas 2014.

For now, let me post some comments I made recently:

I just came through the 4th year of “Waves Of Praise” on Christmas Day.  It Was The Lord Who Clearly Asked me to do this.  I wondered about it because I  have done in-depth studies of, and follow the Feasts.  What He Showed me was amazing.

On Christmas, a pagan holiday, people think more about Him and His Birth (even though its not His Birthday,) than any other time except Easter or Passover. People who almost never go to churches pack them on Christmas Eve or Day.  Plays, pageants, musicals, and choirs are put on that pull people in to hear about Him, worship Him and praise Him.  He Told me that ANY day His people think about Him is a good day.

It is a season filled with love and giving, and reaching out to the poor and needy.  It is a season people often step outside of themselves and their own little worlds, to remember others.  It is a time of the year that donations are at their highest, often helping to carry on the work of God in churches and ministries for the coming year.

For 24 hours at 3pm in each time zone, people just gathered together for the Waves Of Praise movement – to praise Him, worship Him, and forget commercialism, wrappings, presents and family feuds.  Which brings up another thing.  Families are often reunited during the Christmas season, with hearts reaching out past their past hurts.  So, how can we say that God isn’t in this?  Sounds like people are walking more like Yeshua at this time of year than at any other.

He Honors the intents of our hearts, and is more about the spirit of the law than the letter of the law. Also, many tv programs, movies and public concerts center on Him and His Story.  Yes, as the Body of Christ, we must remember that God Ordained the 7 Feasts.  We are beginning to restore the celebrations of the Holy Feast Days of The Lord.  After all, Jesus Celebrated them every year for the 33 years He Was on earth.  That means, He Celebrated The Sabbath on Friday nights and Saturdays over 1700 times in His Life (33 years x 52 weeks.)

But, He Is not about ritualism or legalism.  In fact, a few years ago, He Reminded me to purchase my ticket for a Seder meal.  I kept thinking I still had time, being caught up in the work He’s Asked me to do.  Eventually it was too late, and all Seder meals in this area were completely sold out.  I literally was upon my bed weeping and weeping as if I’d lost my Best Friend.  I understand the importance of keeping the Feasts and the inherent blessings. He Came to me, and Said, “I Was Told you were weeping. You still have time to go to the store and get the things you need to celebrate a Seder meal at home.  So, I quickly ran to the store.  Step by step, He Took the lengthy Seder service and Collapsed it into 30-40 minutes, covering all the basic points. ” He Did away with legalism, and ritualism and Helped me to give Him Honor.  I will never forget this.  Relationship with HIM is and always will be more important than dates on a calendar – pagan or God’s Calendar.  It is all about honoring Him, and praising Him.  At Christmas, people even get bold about “making sure Christ is in Christmas, ” and “Merry Christmas” instead of “Happy Holidays.” This cements it in people that they need to stand up for their belief in Him, and perhaps it’s a form of training for these end times.

One last thought:  God IS NOT about lights, trees, ornaments, wrappings or running up credit card bills.  He’s NOT about causing families to go beyond their means.  He’s NOT about the latest electronic things, or the latest video games.  Most of them He Wouldn’t Want you to have because of their content.  God IS NOT about feeling “less than” if you can’t afford to buy presents.  Remember, He Had One Garment and no place to Lay His Head.  The commercialism of Christmas has to go.  It’s all about manufacturers hyping up Christmas so that people will feel awful if their children don’t have the latest Elmo or whatever. News flash:  Elmo’s not going to Heaven!  Make next year a simpler Christmas, more reflective of your Savior.  Buy somebody in Africa or elsewhere a goat, a lamb, or a cow.  Let your whole family get involved of “how we can help others” instead of “I HAVE to have this toy!”  Raise up a child in the way they should go……

May The Lord Bless you!

Waves of Praise, The Miracles Of Jesus Ministry