Is There Room for Christ in Christmas? 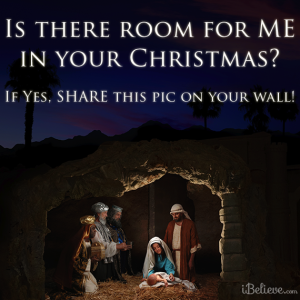 Many people have talked about “putting Christ back in Christmas,” and of getting away from the rampant commercialism, the pagan customs and more.  Here is a “God Idea” Given to me in 2010.  Since then it’s been growing expontentially!  We’d love it if you began this new tradition in your homes this Christmas.

There’s been questions and concerns that are coming up about Christmas being a pagan holiday.  Is it wrong to celebrate Jesus (Yeshua) on Christmas because it’s the pagan feast of saturnalia?  They worship the sun god, sol invictus, who has many other names but is ultimately lucifer.

Wait a minute.  The God I know and serve, CREATED THE HEAVENS AND THE EARTH.  EVERY day is HIS Day!  Every breath we take…is Given by Him, with every heartbeat.   HE DESERVES The Glory!

Isn’t Chanukah about the taking back of The Temple, destroying their statue of Zeus and cleansing it from defilement? Isn’t that what we’re doing with this movement?  Taking back what satan meant for evil and turning it to praise for The Lord!

Today’s Christmas has often become about stuffed bellies, emptied wallets, threatened credit reports, toys that break quickly, gimme, gimme, I want I want!  It’s about outdoing everyone else with indoor and outdoor decorations.

Yet, it is truly the season of love, more than at any other time of the year.  We sing songs to The Lord, to His Father, and to Holy Spirit.  We think about the trials Mary and Joseph suffered to bring Jesus into this world.  She was stoned, he was falsely accused of fornication.  They were literally run out of town.  These things were but a foreshadowing of The Suffering of their Son.

There is so much good that happens at this time of year, more than any other time of the year as hearts are opened and people reconcile.  Families gather and actually spend “family time.”  While The Bible Tells us to abstain from all appearance of evil, I tell you that we should be praising and thanking The Lord on Christmas and always.  I’ve prayed and prayed over the last 5 years of this worldwide praise movement.  I’ve put in countless hours in extreme circumstances with no monies to really boost this message.  Yet, God Has Taken a mere $150 spent over 5 years, and reached peoples in well over 120 countries as of Christmas 2013.

I invite you to put down the pagan customs, gather your friends and family and set aside time at 3pm in your time zone, and let your voices be heard in songs and praises, in poems and Scriptures about Him.

Will you be participating?  Let us know so we can plan where our research and outreach efforts will be targeted to for next year!